This post will assume you have watched https://www.youtube.com/watch?v=oUIjG-y4zaA. You may also find it helpful to read https://rustc-dev-guide.rust-lang.org/building/bootstrapping.html#stages-of-bootstrapping, but I won’t assume prior knowledge of the information there.

Why is bootstrap confusing?

People get confused by Rust’s build system a lot. I have been trying for a while to figure out what makes Rust uniquely hard here, as a lot of the people who are confused are experienced compiler engineers who have used staged compilers in the past. Here are some theories I have.

Is “stage 0” is uniquely confusing?

What do other compilers call “stage 0”?

https://gcc.gnu.org/install/build.html refers to a “3-stage” build, and names the stages “stage1”, “stage2”, “stage3”. It also references a “native compiler”. As far as I can tell, “native compiler” corresponds to what Rust calls “stage 0”, and stage 1/2/3 are all exactly equivalent, i.e:

https://llvm.org/docs/AdvancedBuilds.html#bootstrap-builds says “In a simple two-stage bootstrap build, we build clang using the system compiler, then use that just-built clang to build clang again.” which again seems to match GCC and Rust.

Why would “stage 0” be confusing?

Maybe treating this as “just” another stage, rather than naming it “native compiler” or “system compiler”, is confusing. That alone seems unlikely though; “0” at least to me seems like a good indication that it’s not being built from source. So renaming stage 0 to “bootstrap compiler” or “pre-compiled compiler”, while helpful, seems unlikely to clear up the confusion.

Is building the standard library confusing?

What do other compilers do?

GCC and Clang do not build their standard libraries from source. Instead, they use the same dynamically linked system standard library for all stages, including the “stage 0” or “system compiler” stage.

(As an aside, that’s horrifying, C doesn’t have a standardized ABI and so this can cause miscompilations even if there are no bugs in the standard library or gcc itself: https://faultlore.com/blah/c-isnt-a-language/#c-doesnt-actually-have-an-abi)

What does Rust do?

Rust also builds its standard library from source. It has three parts:

All three can be built by exactly two versions of rustc:

Why would this be confusing?

Having to support two versions is in fact the original motivation for this post, since it causes lots of pain for changes that modify both the compiler and standard library; see https://github.com/rust-lang/rust/pull/84863 for an example that modifies both in the same PR and https://github.com/rust-lang/rust/pull/99917 for an example that depends on changes to the compiler that haven’t yet landed on beta.

What can we do about it?

Supporting two versions is not an intrinsic requirement. We do it for two reasons:

1 is “just” implementation work to fix: if there are no changes to the compiler, we can download CI artifacts for that commit and use those instead. There are a few bugs to fix but they’re surmountable.

2 is harder. Either we add cfg(bootstrap) to the compiler to use a different implementation when building with stage0 than stage1, or we stop using nightly standard library features until they reach beta. See https://rust-lang.zulipchat.com/#narrow/stream/131828-t-compiler/topic/Building.20rustc.20with.20beta.20libstd/near/209899890 for a very (very) long discussion of the tradeoffs here.

There are some more benefits to supporting a single version not discussed there:

I’ve put together some data on how often using those features before they hit beta happens in practice, and - at least from 1.61.0 onwards - it appears it never happens. See https://github.com/jyn514/rust/tree/versions-used for how that data was gathered (run ./collect_new_versions.sh). What’s more common is renaming a method before it’s stable; see https://github.com/rust-lang/rust/pull/79805/files for an example. The cfg(bootstrap) code to handle this in the compiler should be pretty simple.

I’ve talked to people on both T-libs and T-compiler and they say that removing cfg(bootstrap) would be an enormous help. Some testimonials:

@thomcc: Yes please. It’s a huge headache. It also frequently comes up as a reason not to let the const-eval team experiment with stuff, since we know ~const is likely going away and don’t want to deal with the “lol we cfg(bootstrap)ed off all of core::iter”.

@fee1-dead: Working on const traits makes the bootstrap issue very apparent because almost all bugs would be found from attempting to use the feature in the standard library. Fixes for those bugs would need to wait six weeks before finally released as the beta compiler, which slows down development and evolution of the feature.

@workingjubilee: Using beta stdlib would make it much easier to experiment outside the compiler/stdlib proper.

@Nilstrieb: I’d rather have a few cfgs in the compiler when necessary instead of cfgs in std all the time.

“But that just moves the cfg(bootstrap) to the compiler!”

(I don’t want to hear about how lang items are ideologically impure. I don’t care. It’s not changing.)

Here is a graph of what the build would like before:

Is the “stage” terminology itself confusing?

What do other compilers do?

What does Rust do?

This is off-by-one from how every other modern compiler counts stages.

https://rustc-dev-guide.rust-lang.org/building/bootstrapping.html#understanding-stages-of-bootstrap spends several paragraphs talking about how build --stage N means “build with stage N”, not “create the compiler that lives in the stage N sysroot”. All the people I’ve talked to who say this meaning of --stage N is intuitive have been using x.py for several years and are experts in the system. Nearly all the people I’ve talked to who find it confusing are either new to the compiler, or contribute regularly but aren’t experts in Rust’s build system - even those who are experienced in bootstrapping compilers for other languages!

In the words of @Nilstrieb:

You build a target. The focus is always what you build.

We are not meeting that intuition today with x.py. It seems unfortunate to have a system that only makes sense if you’ve used it for a long time and are accustomed to it. If you’re using it for several years, you have time to relearn the system.

What can we do instead?

This correspond closely, but not exactly, to --stage 0/1/2/3 (respectively). Here is a conversion guide between the two: 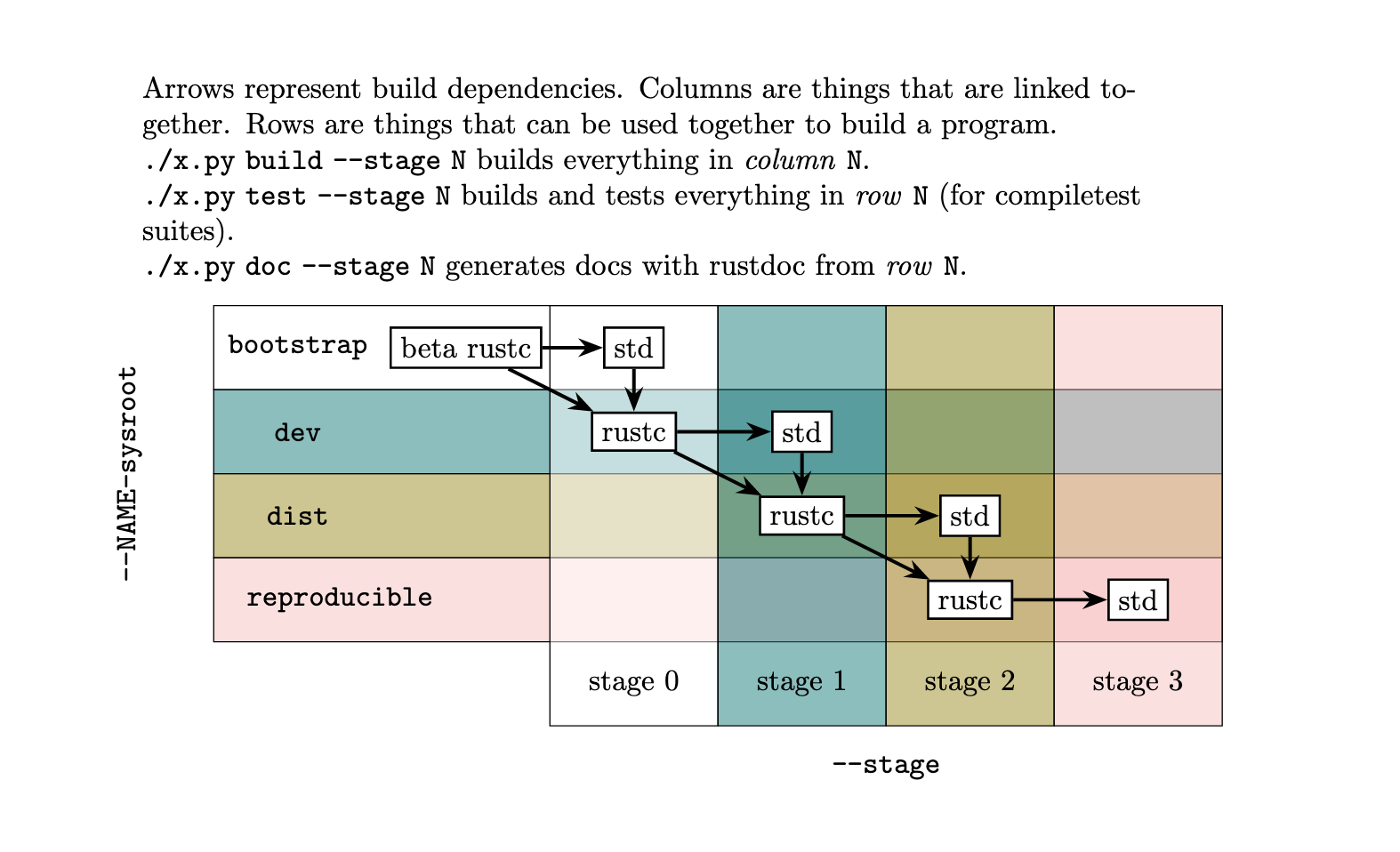 I propose not putting this in the dev-guide, but creating an inside-rust post which we link to in bootstrap’s changelog. The idea is for people who’ve already been using x.py to see the guide, but not people learning the tool for the first time. We would keep --stage for a time, but eventually deprecate it.

I want to call out a few interesting properties of these flags:

To make the new flags easier to learn, we can name the sysroots directories after the flags: build/host/{bootstrap,dev,dist}-sysroot. I have not yet decided if we should introduce a reproducible-sysroot or not; see https://github.com/rust-lang/rust/issues/90244#issuecomment-1120649548 for some of the difficulties involved.

Skimmed over in the previous sections is how to get people to use download-rustc. If we enable it unconditionally for everyone, distros will get very upset. If we don’t enable it, people working on the standard library will have horrifically long compile times.

To avoid this, we could require people to set a profile for config.toml. To avoid making distros hate us too much, ./configure would set the user profile; running ./x.py build without creating a profile would give a hard error pointing you to x.py setup. We would still treat an empty config.toml as opting-in to no profile.

Here are all the proposed changes in this post, gathered in one place:

That’s a lot of breaking changes and a lot of work, for things we are not sure will make the user experience easier. To avoid multiple breaking changes in short succession, I propose making all the changes at once, and inviting people to try out the changes from a branch before merging them. If we have trouble getting user feedback, I could create a standalone binary which uses the new *-sysroot flags even on the master branch. Note that this will not be possible for the changes removing cfg(bootstrap) from std, since that requires changes outside of bootstrap.